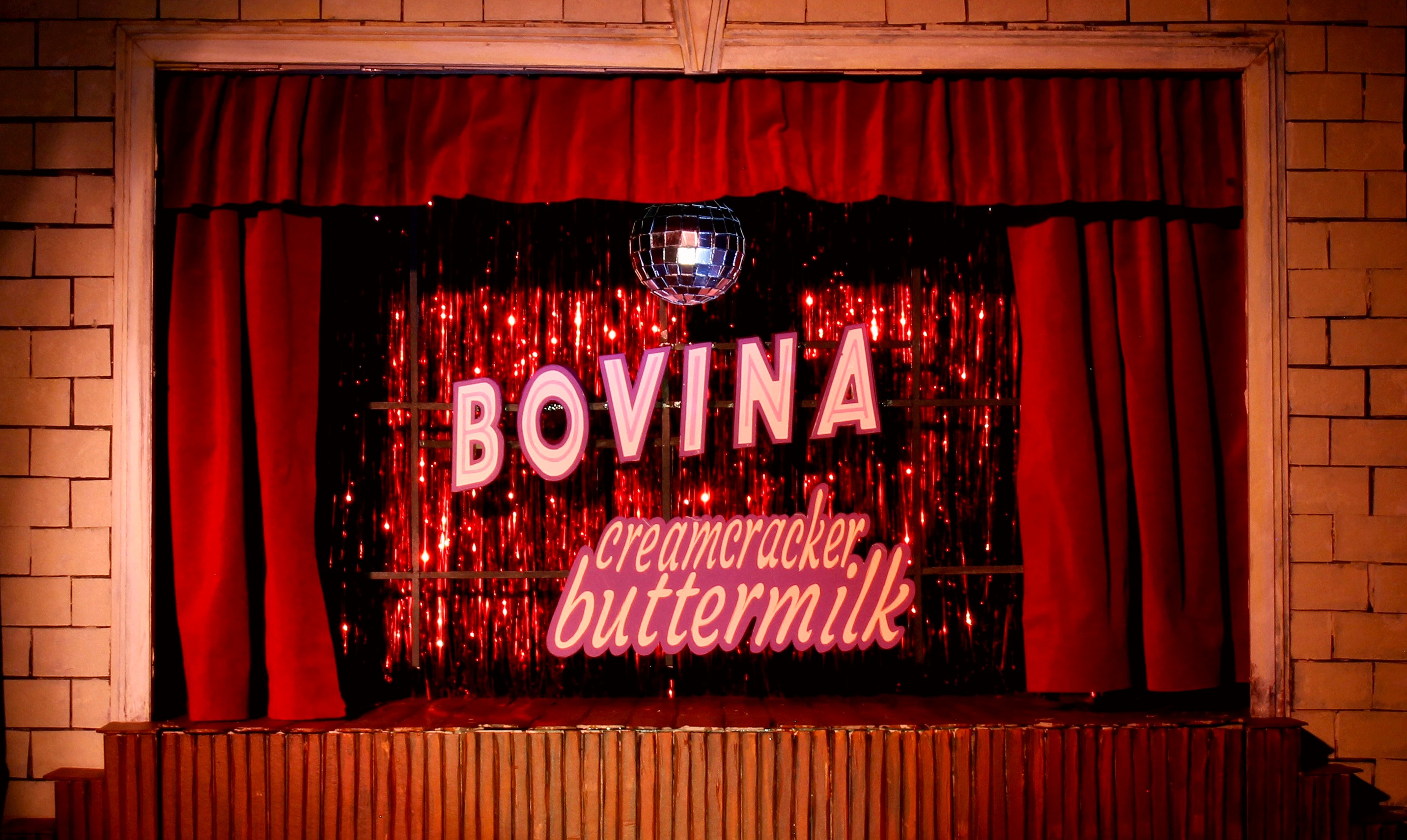 What happens when two animators go on holiday? An animated drag musical, of course!

While relaxing on holiday in Wexford, Joe and John of Studio 9 Animation watched West Side Story (or let’s be honest, re-watched…again!). As they walked down by the Blackwater River, they found themselves singing the Jet Song and dancing down the path. Wouldn’t it be incredible, they thought, to make an animated musical?

Remembering a GCN article they had read over breakfast about a farmer’s positive experience of coming out as gay in rural Ireland, they put the pieces together, and so Bovina Creamcrackers Buttermilk was born.

On returning from their holiday, Joe and John got in touch with some of their regular collaborators; writer, Saoirse Anton and character designer, David Delaney. Over the next few months, they had scripting sessions over Zoom, drafted storyboards, and figured out all of the ways cows and chickens might dance. And the rest, as they say, is history…

Though Bovina Creamcrackers Buttermilk is alive in the imaginations of its creators, and within the walls of Studio 9, we need your help to bring this short film to the screen.

John and Joe established Studio 9 in 2018, and since then have developed their unique stop motion/digital hybrid style, working with a range of commercial and cultural clients in Ireland and internationally. Now it’s time for the next step in the journey, making the leap into a full stop-motion animation studio that brings our stories of Irish life to the screen, and celebrates the diversity of what it means to be Irish through animation.

But to take this big step, we need your help. By supporting our crowdfunding campaign, you are supporting this evolution. Your money will go directly towards the costs of materials and time – puppet creations, music composition, set-building materials, and the cost of keeping the studio doors open and lights on.

Though donating will automatically give you a warm glowy feeling of knowing that you have supported independent artists, we also have some exciting rewards on offer!

A LITTLE BIT OF OUR PROCESS

We launched out campaign this day last week. We have had some beautiful feedback which has made myself and john very happy and made the work so far really worth while. Incredibly, we are also 46% funded!

We wanted to show you all how the characters were developed from our early sketches to the character development by the very talented @daviddelaneyart.

A little bit from Saoirse Anton on why she thinks its an important piece to make! 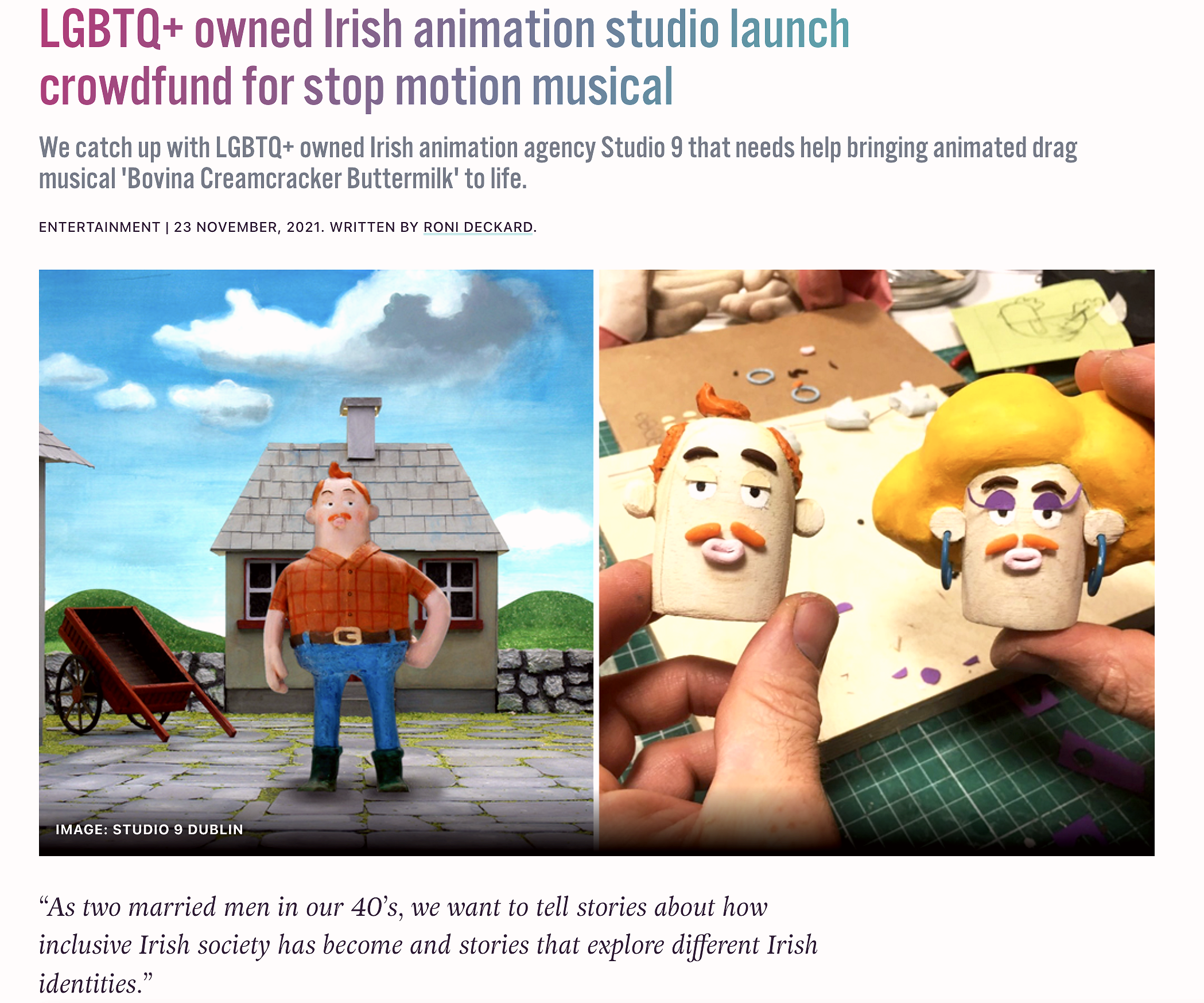 The touching idea for the animated drag musical Bovina Creamcracker Buttermilk originated in the talented brains of Joe and John, collaborative creators of Studio 9,  the LGBTQ+ Irish Animation studio. Incredibly, the duo concieved the idea after recalling a GCN article about a gay farmer breaking down LGBTQ+ stereotypes in farming.

“The idea for Bovina came when we were on holiday beside the blackwater in Co Waterford,” they continue, “we had been rewatching West Side Story and walking the back roads when the idea emerged to make an animated musical.”

“The article in GCN provided us with the potential for the main character to be a farmer. There was a quote from the article that stated: “I wish I knew that the person that had the biggest problem with it was myself.” This quote gave a sense of the overall narrative and a potential solution to the farmer’s struggle. On a personal level, this story was very touching and we chatted about similarities in our own experience coming out. The article in GCN gave us the structure and setting for our story,” the duo told us.

Bovina Creamcracker Buttermilk is a heartwarming animated stop-motion musical about secret desires turned public with support from family and friends. Liam, a farmer in the countryside, hides his pleasurable moments of dancing as Bovina. When the neighbours catch on, they organise a fabulous talent show inviting Bovina to preform.

Established in 2018, the LGBTQ+ Irish animation studio has developed its unique motion/digital hybrid style, working with a range of commercial and cultural clients in Ireland and internationally. Bovina Creamcracker Buttermilk is the next step for this journey by making the leap into a full stop-motion animation studio that brings stories of Irish life to the screen, and celebrates the diversity of what it means to be Irish through animation.

On the importance of Studio 9 in their own lives, Joe and John write that “as a married couple who live and work in the same building (the studio is in the basement and we live upstairs) it has really become intertwined with the very fabric of our lives.”

“We have a symbiotic relationship with the studio, it needs constant nurturing and attention and in return, it provides a foundation from which we can develop and grow.”

Since the idea for the stop-motion’s inception 2 years ago, they say that “we developed the concept with some regular collaborators; the script with Saoirse Anton and characters with David Delaney. We were shortlisted for funding but were ultimately unsuccessful. However, at this point, we had fallen in love with the story and the characters and decided to try and find a way to make it ourselves.”

Eventually, “we got funding to do a course with Aardman Studios in Bristol to learn how to animate stop motion puppets, and we got some funding from  Screen Ireland to learn how to build puppets. Finally, we set up our own crowdfunding page on Fundit and produced a promotional video,” they say.

On the importance of being able to create the story of Bovina Creamcracker Buttermilk, Joe and John say that “Bovina is ultimately about diversity and inclusion and Liam coming to terms with himself and being accepted by the wider community,” and draws on experiences in their own lives: “The theme of the film made us recall the excitement of Club nights like HAM and seeing the amazing drag performances there. These clubs were spaces where anything was allowed, the more outrageous the better! It was a pivotal time for us and in some ways creating the Bovina, the story has replicated the excitement of those days.”

For Joe and John, stop-motion puppets will transcend the limitations of other animation techniques because of the 3D characters that “create engaging worlds that convey emotions and create a credible platform to tell these stories from.”

In regards to the studio itself, Joe and John have found their perfect artistic medium within stop-motion: “The animation industry is thriving in Ireland at the moment. We are developing a niche within this industry, as one of the few studios making stop-motion animation,” they say.

Not only is the animation fantastic, but Joe and John’s goals for Studio 9 are incredibly noble. When asked what being able to fully create this project would mean, they told us, “We are carving our own unique identity as a studio in terms of the stories we choose to tell and how we tell them. We want to use our voice as a studio to represent a  true sense of Irishness today!”

Support this worthy project on their Fundit page, so that we can all enjoy Bovina’s story as soon as possible and receive more phenomial Studio 9 content!